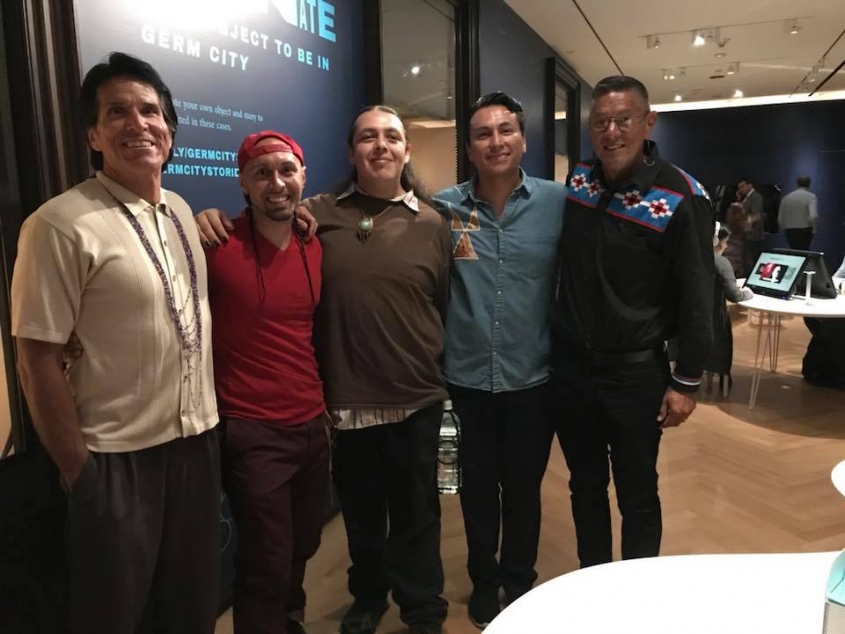 Man and microbes have always co-habited, and their relationship has had a profound influence on human history—especially in cities, the crossroads of the movements of people, goods, and germs. Germ City: Microbes and the Metropolis explores the complex story of New York’s long battle against infectious disease—a fight involving government, urban planners, medical professionals, businesses, and activists. It reveals how our understanding of disease has changed us physically, socially, and culturally, and the surprising interplay between people and pathogens in an urban context.

This exhibition is organized by the Museum of the City of New York in collaboration with The New York Academy of Medicine and Wellcome. It is part of Wellcome’s international project Contagious Cities, which explores the interplay of people and pathogens in urban contexts. Drawing on the model of the Wellcome Collection’s “Reading Room,” Germ City features a hybrid gallery and library where visitors can view historical artifacts alongside contemporary artworks created for the exhibition, delve into the exhibition’s themes with a curated selection of books, and access a wide range of perspectives through digital interactives. (Reference: Museum Of The City Of New York Website)

The AICH Board Chair Rick Chavolla (Kumeyaay) worked with the new volunteer AICH Executive Director Curtis Harris-Davia (San Carlos Apache),  AICH Volunteer Sheldon Raymore (Cheyenne River Sioux), and AICH Volunteer Phillip Dallas Stands  (Rosebud Sioux) along with Museum Of The City Of New York’s Rebecca Hayes Jacobs (Post-Doctoral Curatorial Fellow) and Deputy Director & Chief Curator Sarah M. Henry to ensure that the American Indian Community House was included in this very important exhibition.  AICH was given a two shelf vitrine to choose items that could voice our narrative.  This will be an ongoing collaboration between AICH and The Museum of the City of New York.  We will be putting out a call for more AICH community members to have an opportunity to display their works in this exhibit for the second round of display items which will be in November 2018.  For inquiries about having your work displayed please contact sraymore@aich.org  We will need photos of the work your submitting and a brief statement as to why you wish to be apart of the Germ City Exhibit.

Museum of the City of New York’s Rebecca Hayes Jacobs worked with the exhibit designers and AICH to have these labels created to read the following.

American Indian Community House – The American Indian Community house began providing services to New York Native Americans living with HIV and AIDS in 1990. Up until that point, there were no existing services that were culturally appropriate for the city’s Native American community. AICH developed prevention messaging that reflected the diversity of the Native community of New York City and incorporated traditional healing methods for Native people living with HIV and AIDS. The items on display here were created and selected by members to represent their history and ongoing work.

Traditional Healing – In Native American traditions, healing is a process of the whole Self, and not just the individual body part or illness. Our elders taught us that health and happiness are the natural state for human beings. For every ailment caused by an imbalance there is an herb, a root, a ceremony, a song, and the right-making words of prayer. Sage, sweetgrass, mugwort, tobacco, and cedar were used in healing and to convey prayers to the Creator. The plants were burned in a fire, after prayer, or in an abalone shell with an eagle feathers.

“Silence = Death” choker, designed and crafted by Phillip Stands – The beaded choker and breast plate are a traditional Lakota means of protecting a warrior’s areas of vulnerability, and this choker is designed to signify to Two-Spirits in New York City that what makes us vulnerable can become our means of protection. Our identity can be slur or armor, our voice can be a war-cry or silent. To stay silent is to leave yourself exposed in a land of new threats and challenges.

PrEPahHontoz Beaded Pre-Exposure Prophylaxis Pills – In 2013, AICH hired a new community educator who presented the first ever PrEP and Pep presentation at the AICH.  PrEP is a course of drugs designed for people who are not HIV-positive but are at high risk of being exposed to the virus.

Miniature Buffalo Skull Carving – The buffalo skull symbolizes the 19th century demise of the buffalo—an emblem of Great Plains Native culture—and also references the “Vanishing Indian” theory, a widely held notion among Americans that Native peoples, like the buffalo, also were dying out. Indeed, in the early 20th century, the Native population had dropped to approximately 250,000, a decrease of some 95 percent of pre-European contact levels. “A good day to live” is a play on the statement, “It’s a good day to die,” attributed to the 19th-century Oglala Lakota leader Crazy Horse.   This was made in honor of the efforts done by the American Red Cross and their 1990 Campaigns throughout Indian Country.

Beaded Turtle Umbilical Cord Bag with Beaded Red AIDS Ribbon – HIV medicines work by preventing the virus from multiplying, which reduces the amount of HIV (viral load) in the body. Having a lower viral load protects a woman’s health and reduces her risk of passing HIV to her child during pregnancy and childbirth.  Among the Plains tribal nations, babies’ umbilical cords are placed in these bags and the child wears them until puberty for good luck.

PrEPahHontoz Miniature Tipi Cover – The Tipi is a symbol that represents home, family, and community. Tipi covers have “Winter Counts” created and placed upon them to tell stories.  In the Lakota-Sioux language the words “Waniyetu Wowapi” translate to “Winter Count.” Images are etched, painted, or drawn on buffalo hides (later on muslin fabric) to mark a notable occurrence amongst the Sioux people, creating a timeline and serving as a historical record of events.  These Winter Counts record the HIV/AIDS movement from the Native American community in New York City and across the nation. “Tradition as Prevention” is a core value of the Tipi Project: this way of preserving information for generations to come is being revised and reclaimed, as we continue to battle the HIV/AIDS epidemic in Native communities.
Article written by Sheldon Raymore.  For more information visit the Musuem Of The City Of New York’s website at https://www.mcny.org/exhibition/germ-city
https://aich.org/wp-content/uploads/2018/09/Curtis-and-Rick.jpg 720 960 AICH https://testingsite01.com/wp-content/uploads/2018/09/aich-logo-brown-text-300x81.png AICH2018-09-14 12:49:092018-09-14 13:34:26American Indian Community House “Germ City Exhibit” at the Museum Of The City Of New York now through April 28th, 2019.